What if a free-to-play mobile game was designed to make you feel like a rich whale playing a free-to-play mobile game, and it was crazy generous with premium currency, made the grind feel like you were always progressing in huge leaps and bounds, and told you all over the place, all the time just how powerful and awesome you are? For people who pre-registered at least, that's exactly what Darkness Rises turned out to be.

Let's be clear: Darkness Rises is pure, unadulterated free-to-play trash. It is not a good game. It is 99% "gamification," 1% game. All characters--female and male alike--are needlessly and laughably sexualized. The "deep and immersive story" it touts in the loading screens is probably literally the first thing that came to someone's head when told to write a "fantasy RPG story." It's more of an accelerated RPG grind simulator than an actual "next-generation action RPG" like it claims to be. My conservative guess is that I spent 90% of my time playing to game navigating menus and 10% actually playing a game. My relationship to the game was much closer to a coach giving a fantasy character workout routines than it was role-playing or controlling a character.

But, all of that said, in the context of all the other free-to-play mobile games out there, this one got its hooks into me and didn't let go for months--even while I was fully aware of what was going on--because every second of screen time is amazingly tuned for satisfaction with very little effort. There are multiple kinds of daily bonuses as well as daily, weekly, and seasonal events and quests, all of which pay out generously so they all feel worth it. It's got every mode imaginable for a game like this--single-player story, single-player horde mode, single-player adventure, duo dungeon, four-player raid, casual and ranked 1v1 PvP, 3v3 PvP, a village to rest for buffs and fish for loot, a camp to develop over time and defend from other players attempting to raid (and raiding others' camps), and probably more--each with its own quests and rewards. There are over a dozen (probably, I never actually counted) different currencies to collect and spend in the game, perfectly designed in a web of one currency leading you to be able to buy access to another activity that gives you another kind of currency that lets you upgrade this or that so you can pass yet another activity with yet a different currency that lets you get that costume you've been eyeing so you look cool in PvP and can climb the ranks more easily so you can get more rewards to start the cycle all over again, but this time all the numbers are bigger. And just when you think a particular currency is getting too difficult to obtain, they swoop in with a new seasonal event where all you have to do is defeat 500 lizard zombies (or whatever, the specific names of everything never mattered in this game) and you'll get a big boost to get you back on track. It makes you feel like you're so smart and doing so much, when half the time you're literally leaving your phone on the table while you eat and your character is playing the level automatically.

At my peak, I was running this game an ace trader on the floor of the New York Stock Exchange. I would wake up every morning and fly through all the menus necessary to collect and maximize every daily, weekly, and seasonal bonus and event. I knew the exact activities I needed to do each day to maximize my time and character progression. I knew exactly how long it took my character to auto-play each level so I could time it between activities like eating and showering as I got ready for work. By the time I left for work, there was only one or two things left to do, which was easy to get back to while I got ready for bed. Every day, I jumped on the hamster wheel, feeling more productive than Jeff Bezos as I raked in the rewards.

Lest you think I'm exaggerating at all, let me show you some evidence of just how dedicated I was: 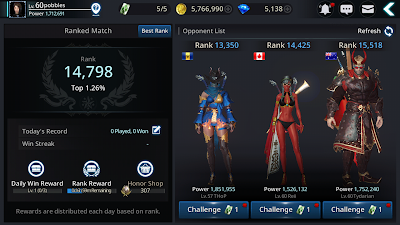 This was my ranked PvP screen the day I finally deleted Darkness Rises. On Facebook, they had recently just celebrated over 10 million downloads worldwide, and there I was, ranked 14,798 out of the whole lot of them, top 1.26% globally. You'll also notice I had over 5,000 gems and 5.7 million gold. To get from fresh download to where I was when I quit, I'm estimating you'd have to spend nearly $500. I walked away from the game having only spent $8.

Why did I do this? I wasn't blind, and I wasn't addicted. I knew exactly every trick they were using to keep me on the wheel, and to be honest, that almost made me want to play more, because I was so impressed how well they were pulling it all off. I finally deleted the game because I felt like I had beat it. I had perfected my engine and could've kept it running, but there wasn't as much to tinker with anymore so it got boring, and the time investment didn't seem worth it anymore just to keep the engine running.

I help run a company, and it's incredibly satisfying to see it grow, but real growth of real people and money is slow and hard. In Darkness Rises, I could do use a lot of the same skills--maximizing productivity, choosing where to invest time and money, delegating tasks--and see the growth at beyond-fantasy rates, all while doing very, very little. Looking back on it, I think that's the main reason Darkness Rises pulled me in so deep for so long--even on days when Mobile Coach was crazy and the outcomes unsure, I knew for sure that pobbles would go up another 50,000 power and I'd earn another 250,000 gold and 1,000 gems if I just put in the time. So, while the characters wear armor and carry swords and spew magic spells, none of that mattered. The real fantasy of Darkness Rises that hooked me was easy, accelerated productivity. And that's a true 21st-century fantasy if ever I've seen one.

(Oh, crap, wait a minute, I feel like I've heard some of these ideas somewhere before...)