In September 1996, Nintendo released the Nintendo 64. Along with the release came Super Mario 64, the first 3D Mario game. Overnight, Mario discovered depth. No longer was he bound to left, right, up, down. Now the in-game camera could circle around him 360 degrees, and Mario could move through doors, up trees, down slopes, under water, and more. It's rare to have such an exact moment to point to when things changed, but it's accurate to say that after September 29, 1996, Mario, Nintendo, and videogames would never be the same.

That moment often gets talked about in games circles in wistful tones. Never again has a technology jump been so immediate and so groundbreaking. Never again has the next console generation felt so totally new. Instead, changes since then have been more incremental. Graphics get a little better every year. Processing power gets a little faster. There's a few more objects on screen. Nothing totally groundbreaking, just a little better every year.

Until 2019. June one month ago, I was lucky enough to have a moment that felt like a Super Mario 64 moment. Only time will tell, but I'm pretty sure we'll look back on AI Dungeon 2 as a moment where something very, very big changed in videogames--and all entertainment, for that matter.


On December 6, 2019, I found this article titled "This AI text adventure game has pretty much infinite possibilities." It sounded cool enough: a text adventure driven by an AI. I was expecting the text adventure equivalent of Spelunky--procedurally generated pieces coming together to create something slightly different each time. What I got was so, so much more than that.

The claim on AI Dungeon's website is actually true: "Anything You Can Express In Language Can Be Done." Literally. You can start at any point, with any premise, and the game will play along, often quite remarkably.


As a story progresses, I'm often baffled at not just the coherence of the AI's answers, but the level of world-building and creativity. This is one of my favorite moments I've had so far, from the same story as above: 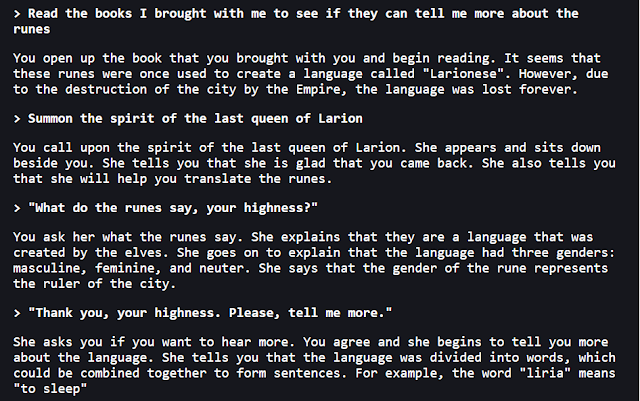 I've read a lot of fantasy in my day, and I can't remember any example of a fictional language that is gendered based on the current ruler. At the same time, it's an entirely plausible and very fantasy-feeling element. And the AI behind AI Dungeon just made it up on the spot, just for me.

To emphasize: none of this text existed before the moment I played the game. I put in prompts, and the game responded, and we went back and forth for the whole story. It's not that the AI is drawing from a pool of available fantasy elements, it's drawing from a massive dataset of English language text and has generated its own rules about how language works simply based on how others have used it. With each new prompt, it then predicts what would follow, based on the most recent prompt as well as the prompts and answers that came before it. (At least, I'm pretty sure that's what I'm reading here and here.) All of this adds up to basically having a dungeon master that's willing to play out any scenario with you at any time, and is as creative as language itself.

With AI Dungeon, I've already played through more scenarios than all other videogames offered me this year combined. I've been a detective who goes to the underworld to interview dead people for clues. I've been a superhero with the power to control light but who can't keep a job. I've been a wannabe Danny Ocean that failed miserably. I've met celebrities. I've survived a zombie apocalypse by summoning a dragon. I've fought off a necromancer by manipulating the natural elements. I've been a wildlife photographer on the hunt for the rarest bird in the world. I haven't even listed half.

As I've played AI Dungeon and watched it grow, two things astound me more than anything else: The first thing is just how fast this game is being developed, evolving, and improving. The first time I played it, I had to do it through a Colab notebook through Google Drive, and it wouldn't even work half the time I tried it. I loved it when it worked and said to myself, "I can't wait for when this downloadable and more reliable." I think a week later, it was on my phone. Two or three more weeks and you can edit and publish stories, create prompts for others to play, view your entire story history, and browse other stories made by other users. Again--it's been a month. Where will this thing be in a year? (Especially considering that most of it so far was made by one college student working out of a dorm room.)

The second thing that has astounded me is the far-reaching implications this has for videogames as a whole. What if every NPC in an RPG had its own instance of this kind of AI running their dialogue, so that you could actually develop relationships with each one over time, and your actions would guide their development in a totally free-form way? What if there was a detective game where certain characters were programmed to "know" certain information and have certain preferences, but you have to have a real conversation with them to get them to open up and reveal the information you need to solve the case?

Or what if, even further down the line, an AI like this was connected to an enormous repository of tagged visual assets, and suddenly the words you write and the AI writes become a 3D world you can explore? And what if that 3D world were rendered as virtual reality? And what if that virtual reality wasn't just in goggles strapped to your face, but projected in a room around you? And what if all of a sudden the holodeck is real?


I'm pretty convinced that when that day inevitably comes, there will be a direct line of inspiration and iteration from this moment and this game--from AI Dungeon 2.

But it's not just vidoegames. Think of how this could affect other forms of storytelling. Eventually, this technology could write novels for you. You wake up one day wanting to read a book about a goose army fighting off evil owl pirates, and with just a little outlining on your part, the 80,000 word book is done and ready to go in a few minutes. Extending a little farther into the future, it's not totally impossible that an animated movie could be cooked up to go along with your book. "On-demand" in the future could mean much more than curated content available at your request; it could start to mean something much closer to Aladdin's genie saying, "Poof, whad'd'you need?"

Behind AI Dungeon 2 is OpenAI's GPT-2 model, which is a 1.5B parameter model trained off 8 million web pages. (Hilariously, the 8 million web pages were crowd-sourced from reddit, of all places--only web pages with 3 or more karma were allowed into the dataset.) The craziest part is that the model available publicly now is purposely limited by its creators because they (very appropriately) fear malicious use of the model to generate fake news or crank out misleading propaganda. What they didn't anticipate, though, is Nick Walton using the model to make a game beyond your wildest imagination. Or, more accurately, a game that is your wildest imagination.

And that's been perhaps the most interesting part for me as a player of AI Dungeon 2--the game is whatever I imagine, but that also means it's only as fun as my ability to imagine. After a few rounds of AI Dungeon 2, you've used up your first default scenarios that come off the top of your head, and then what follows is a strange moment of introspection: when I can do literally anything, what do I really want to do? Of all things, AI Dungeon 2 reminded me of the now-cliche quote: "What would you do if you if you knew you couldn't fail?" This is normally meant to be a prompt to get you to ponder what your biggest dreams are in life, but while I've heard that quote dozens of times, I've never taken it as seriously as when I played AI Dungeon 2. Who do I want to be? What do I want to do? What power do I want? What story do I want? Suddenly, for me, this fun, wacky imagination toy became serious self-reflection.

This makes me so excited for the future. A lot of people might consider the possibilities of AI Dungeon 2 and the potential futures I've outlined here and despair. "We won't write our own books anymore?" you might have said a couple paragraphs ago. "AI-generated animation??" you might have shouted incredulously. The tendency is to believe that as automation rises, creativity dies. But I see it as taking the boring part out of imagination--as unlocking the door between our imagination and the outside world. The future I hope for--and the future I see in AI Dungeon 2--is a collaboration between humans and AI so that human ideas can break through from our minds to the outside world faster and more frequently. The AI won't replace creativity, it will replace the grunt work of transferring your creativity to the medium of your choice, so that your ideas can flow freely, and your imagination can run wild.

In a way, I've think I've always hoped for that kind of future, I just haven't been able to explain it exactly. AI Dungeon 2 has helped me see that future more clearly, and now, not only can I describe it--I can believe in it.

You can try AI Dungeon 2 yourself on iPhone, Android, or the web. Go here for download/play links. You can also fund the development directly through Patreon.