Pokemon is like the Olympics for me: it comes around about once every four years, and when it does, it's all I care about for about two weeks. Then it goes quiet again and I don't really think about it much until the next one. But I love it so much every time.

For a lot of other people, though, Pokemon isn't the Olympics, it's life, and they're getting pretty frustrated about going in the same circle over and over again for 20+ years now. A lot of those kinds of fans see Pokemon Sword and Pokemon Shield as ignorant, lazy, wasted opportunities that don't understand the fan base. On the contrary, I'm pretty sure these games know exactly who's playing them, and it's doing it's best to not-so-politely ask them to move on because this has always been a "children's entertainment property."

**If it's even possible to spoil a Pokemon game anymore, this is your warning that I will now be "spoiling" Pokemon Sword/Shield**

I've seen a lot of fuss being made about the fact that Pokemon is the "highest grossing media franchise of all time." The reason everyone's talking about it is because of this Wikipedia article, that was turned into this reddit post, which was turned into a prettier version of the same graphic by...TitleMax? The loan company? The internet is weird. Both versions of the graphic have been distributed all over the internet, like in this Dexerto article. While both the reddit post and the Wikipedia article contain several comments and questions raising doubts about several of the data points in this graphic, none of that matters, and this is internet canon now.

Usually, the people bringing this up are using it as the the first half of a complaint about Sword and Shield, i.e., "This is the highest grossing media franchise of all time, and look at those atrocious trees!" Basically, the argument goes that if the franchise is making so much money, the game should be look better and be better. Another common talking point is that this should have been the "Breath of the Wild of Pokemon," meaning it should've shaken up the formula and been the truly groundbreaking new design that Breath of the Wild was for the Zelda franchise.

Here's my take: look again at that chart for two more seconds. What themes do you see? Rather, what one glaringly obvious theme do you see down the whole dang list? There are two answers I'm fishing for here: (1) merchandise makes more money than anything else by an estimated gazillion dollars, and (2) every franchise on this list is either explicitly for kids, or easily rebranded/repackaged for kids. Game of Thrones isn't on there. James Bond isn't. Heck, Lord of the Rings isn't even on there. Basically, if you think this chart matters, that is an argument for keeping Pokemon as kid-centric as possible. Why would the franchise on top mess with the formula that got it there?

But that's the corporate, capitalistic argument for kid-friendly Pokemon. While I see it as pretty dang compelling, it's not actually the argument that Pokemon's creators seems to be making. Pokemon Sword and Shield have a pretty clear message for the adults playing it, and it has nothing to do with revenue.

Pokemon has always had some interesting undertones of adult anxiety, but whether real or imagined, it seemed to me like Pokemon Sword had it in spades. More often than was comfortable or funny, you'd be walking around the game and the NPCs would just be offering up the pains of their soul like this:

As the game progresses, though, these adult anxieties and struggles come out more and more explicitly in key story beats. Like this: 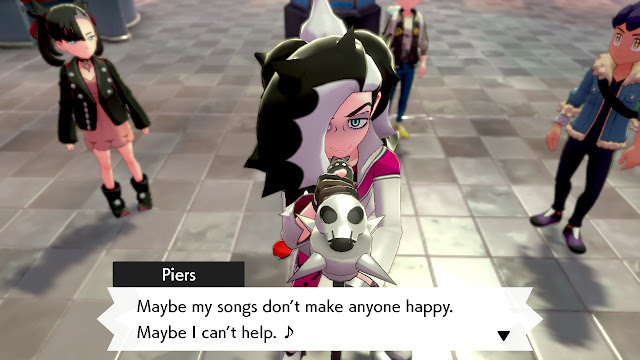 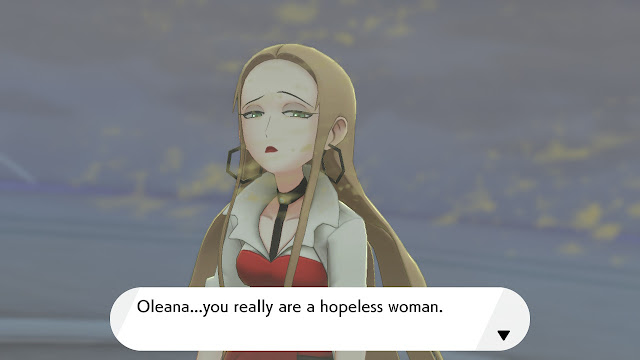 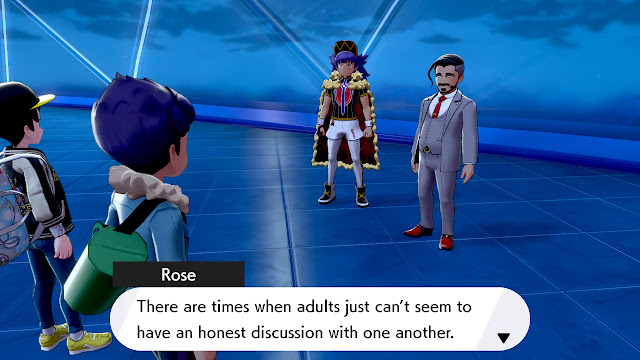 There are clearly nods to adults and adult struggles throughout the game, but the real message to the adult players comes through most crystal clear right at the climax of the game.

Now, this next one I'm going to show you takes a bit of setup. If you haven't played Pokemon Sword or Shield, let me sum up one of the plot threads for you: You, the player, have a friend named Hop, who has an older brother Leo, who is the current Galar Region Pokemon champion. Leo is a young adult, while you and Hop are the usual 10- or 11-year-old Pokemon hero age. You go around collecting gym badges to prove you're a real good Pokemon battler until eventually you've got enough badges to take on Leo, the champion himself, and take your place as the Pokemon champion. For 99% of players, you will likely destroy Leo like you've destroyed everyone else in the game. But then look at what Leo, the established young adult Pokemon champion, says to your character, the child just now coming into his/her own as a new Pokemon trainer:

Pokemon isn't ignoring it's adult fans. It isn't lazy to stick with the game design that works. Game Freak, the Pokemon Company, and Nintendo all know exactly who you are and exactly what you want. But just like Pokemon Blue wasn't for your parents, this game is not for you. They have time and again made the conscious choice to keep this a kids' game and a kids' franchise, and its creators are practically begging you to realize that, and begging you to pass the torch to a new generation.

I don't think that means they don't want you to play it as an adult--clearly, some of the comments above can only be appreciated fully by adults--but they want you to realize that you are playing a game that is meant for children, not for you. At this point, you're as likely to get a hardcore Pokemon game geared toward adults as you are to get an R-rated Mickey Mouse movie.

"But Zelda grew up!" "But Mario Odyssey looks great!" Yup, you're right. Different decisions were made for those franchises. And those are better games than Pokemon Sword and Shield. But my point is you were never promised adult Pokemon, and you shouldn't be surprised that when you buy a game for kids, you end up playing a game for kids. Could they have made the trees look better? Yeah, probably. Could the game be more difficult? Of course. But kids don't care about that stuff, so Pokemon doesn't care. (Believe me: the three-year-old that played most of the game with me has no complaints.) Being frustrated that Pokemon is still a kids game is like being frustrated that Candyland hasn't turned into Catan.

Sure, one reason to pass Pokemon on to the next generation is that the next generation won't be satisfied with just playing the game and they'll want the toys and the plushes and the backpacks and the pencils, but I don't think that's what's driving every Jim and Jane Pokemon Developer at Game Freak. The whole driving spirit of Pokemon is the childlike wonder at the natural world outside your front door--that fascination that only kids have that lets them see an ant on the sidewalk and think they've made some huge discovery. All of Pokemon is an attempt to capture the world through the eyes of a child--exaggerating a normal crab into a super-powered crushing monster, or an energetic dog into a creature with literal fire in its body.

In terms of that spirit, Pokemon Sword and Shield deliver massively. Some of the new Pokemon are already among my favorites of all time, and they clearly and playfully follow that same pattern of looking at real things and distorting them just enough through the lens of a child that they become something new entirely.

This is a franchise about kids and for kids, and I hope that never changes. I want the formula. I want the laughably low difficulty. Not because I want Game Freak to be raking in that sweet merch cash forever, but because I think that the things that Pokemon stands for are worth preserving, and worth preserving in a way that kids can enjoy them just as easily as adults. 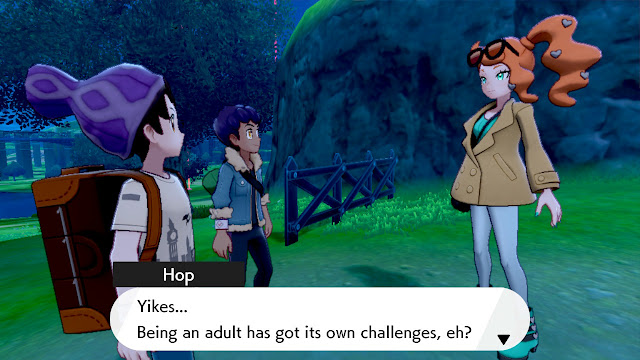 ...That all being said, I think I may have found a game that all the people disappointed with Pokemon could move on to. If you want a world that still walks and talks like a fairy tale but makes a few more nods to the fact that you're an adult and you can deal with adult things, come over here and meet my new friend, Dragon Quest XI.

Dragon Quest XI at first feels very similar to Pokemon. Often, it even looks like Pokemon. (I mean, this is Machamp, there's no getting around that.) They both take the real world and stretch and squish it like a funhouse mirror with an anime twist. They're both turn-based JRPGs where you pick party out of a larger group of available characters to send into battle.

But as you get into it, you start to realize that Dragon Quest's funhouse mirror is a little bit taller than Pokemon's. Dragon Quest is less afraid to show more adult aspects of life, and it's also not afraid to give its adult players more of a challenge. The battle system is more complex and more dangerous than Pokemon. The monsters aren't just cute, they can also wipe out kingdoms and set people's lives on dark paths. Yes, there's even some sex in there (but unfortunately, it's very juvenile and often objectifying--you can do better, developers!).

If you want a game that looks and feels like Pokemon grew up a bit, Dragon Quest XI just might feel like all your dreams have come true (except for the part of your dreams where women are treated equally and respectfully--seriously, it's pretty bad sometimes, you guys, and I'm sorry). 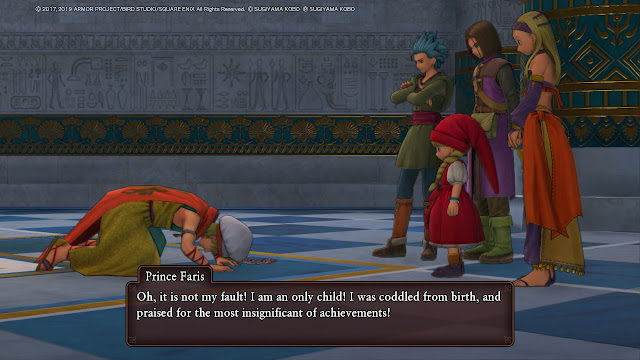 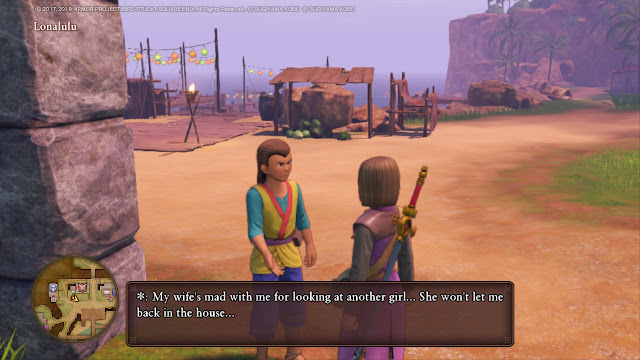 I haven't played all of Dragon Quest XI yet, but so far, it definitely feels like it's a lot of what some Pokemon fans want but won't get from Pokemon because it has remained a kid-first franchise.

In what is unquestionably the definitive Dragon Quest XI review, professional Dragon Quest expert Tim Rogers calls Dragon Quest games "bedtime stories." In the review, this is meant literally, as in, people play the game before they go to bed. What I didn't realize, though, is that Dragon Quest XI is also basically a Little Golden Book collection of bedtime stories, in the sense that it's not afraid to give you its moral lessons plain and straight, no matter how cliche. This is one area where it feels more like a kids game and more like Pokemon: 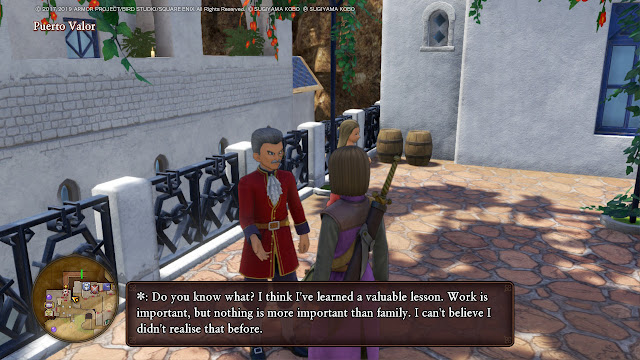 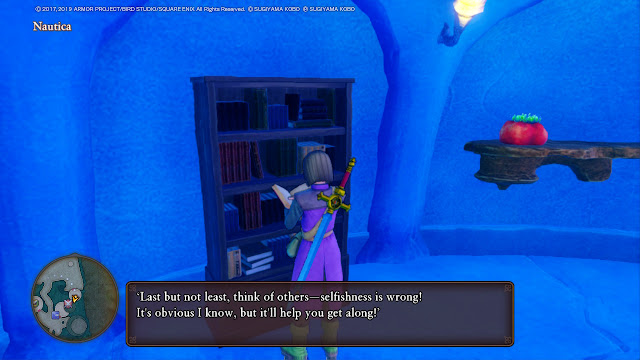 Don't let that fool you, though. I don't say this lightly: Dragon Quest XI has some of the most interesting and fleshed out side quest stories since the Witcher 3. In fact, Dragon Quest often feels like the game that would show up in my kids' heads if I tried to describe to them the world of the Witcher. So if you're looking for something in between Pokemon and Witcher 3 in terms of an RPG game and world, congratulations, you've found it.

Plus, you can do this.


As far as I can tell, there is no unique gameplay benefit to doing this. Your horse can kick monsters with the same effect as swinging your sword on the back of this Slime Knight. Basically, I'm pretty sure the only reason this is in the game is because it's hilarious and fun. And I love that so, so much.

So, yes, Pokemon is still a kids game. Would it be cool to have a more adult-leaning Pokemon game? Maybe, but I'm afraid it would ruin things  (strong content warning on that link. Seriously, is that what anyone wants???).

But if you don't want to wait for that (probably) non-existent Pokemon future, seriously, give Dragon Quest XI a try.

...That, or try birdwatching.