Starting on January 1, 2016, I kept a list of every game I played for the whole year, including both videogames and tabletop games. Every game I touched counted, even if I only played it for a few minutes. I didn't especially try to get a large number, I just wanted to keep track of what games I played.

Let's take a closer look, shall we?

(As I wrote this post, I discovered a couple things: I hadn't recorded playing Paperback or Mario Kart Wii. Mario Kart Wii is the only Wii game I played, so the analysis below is only for 145 games and 9 platforms. Also, Sports Friends is on this list twice, so even though the list above ends at 146, there's only 145 unique titles there.)

I played games on 10 different platforms this year. Table in this case means a literal table--I included board and card games on this list.

I used a very basic scale and gave my gut reaction to each game. The scale was Bad, Fine, Good, Great, Amazing, and Pile. Pile simply means I played it, but not long enough to really form an opinion.

One exception: Red Dead Redemption. I didn't really play it long enough to form a full opinion, but I played it enough to know it's at least great. So I'm counting it as that here.

What platform was most worth my time in 2016? Let's find out! 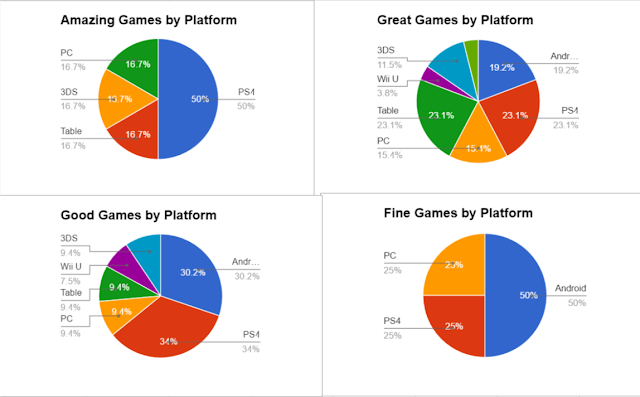 Diving further, I used a weighted scale to score each platform. Each game gave it's platform a certain number of points based on its rating. Here's the scale:

Here are the results:


But where did I get the most bang for my buck? Take a look at the average score per game by platform:

I didn't take the time to track down the exact release date of every game, but I did a quick analysis on how many games were released in 2016 or earlier. Here are the results:

In this case, "expansion" means a game that didn't come out in 2016, but had some significant content addition that released in 2016. For example: The Witcher 3: Blood and Wine and Destiny: Rise of Iron.

Fun fact: 25 of the games on this list (17.36%) were not "released" when I played them--they were in beta, alpha, or whatever the developers decided to call it at the time. 2 of them (Overwatch open beta and Steep open beta) were even second pre-releases, meaning I played it in one state, then another state before release.

Did playing a game before it's release cause me to buy/spend any money on the full game? Exactly 24% of the time (6 purchases). One caveat: 2 of the games (Gwent: The Witcher Card Game and For Honor) are not released yet, so I couldn't spend any money of them yet even if I wanted to (though for now I wouldn't in either case).

As for letting me play it twice before launch? 50% purchase rate: bought Overwatch, didn't go for Steep.

Here are some things I learned that I hope to apply to my gaming habits in this new year:
If you really read all of this, you're incredible and thank you so much. Let's talk more about games!